One of the best places to camp and hike is in Africa. The continent teems with wildlife and abounds in scenic beauty. Buffalo pound their feet across the dry earth. The sun beats down on parched skin. Lions spring forth from the savannah onto their prey. If you are looking for a place see majestic wildlife and wondrous nature, then East Africa is the place you want to go first on this continent. In this article, you will be treated to 13 Inspirational Photos of Tanzania’s Serengeti National Park.

You might be wondering, “where does the name, ‘Serengeti,’ come from? The answer is that it is a Masai word, meaning endless plains. This is very much the case as the park spans over 12,000 square miles (30,000 square kilometers), making it quite vast. By far, it is one of the world’s most renowned national parks, so let’s get started.

1. A Misty African Morning Welcomes You 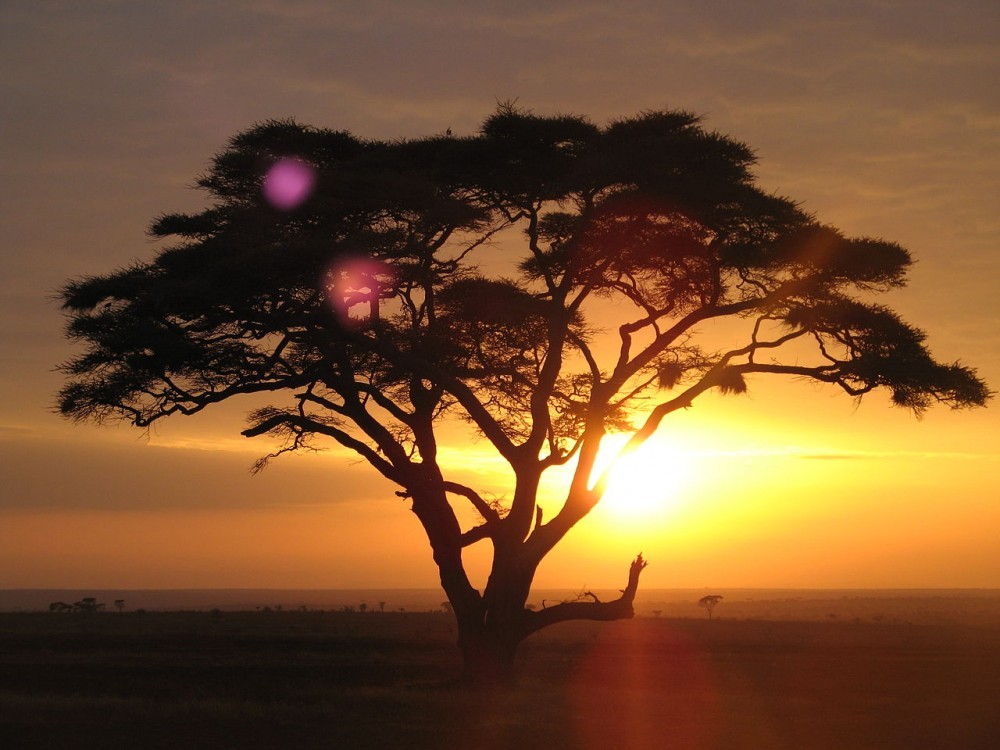 One of the most common trees you will see on safari in East Africa is the Acacia Tree. There are over 800 different species of this tree! They love to grow in dry, sunny places like Australia, Africa, parts of America, Asia, and Europe. Some of them can end up reaching a height of over 40 ft (12 m) and a diameter of 3 ft (1 m).

2. The Great Migration – It is Very Big 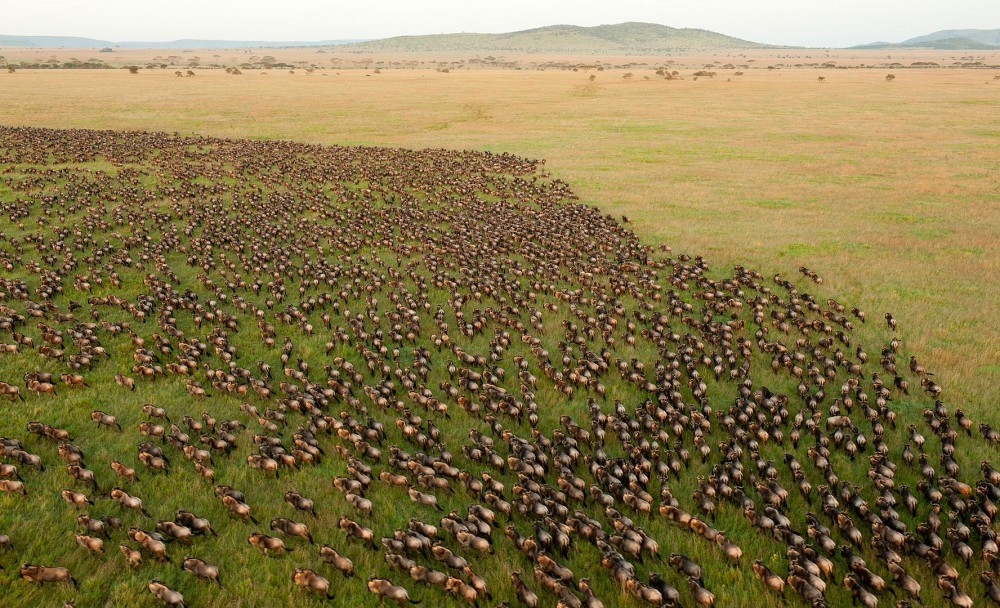 From late November to mid-March each year, 1.5 million Wildebeest migrate across the Serengeti in search of food and water and over a half a million wildebeest are born during this time. That is a lot of animals. It is the top reasons to come to the Serengeti. On a camping safari in this national park, you will see a whole array of different animals and witness nature at its fullest. It is incredible.

3. Giraffes, the Tall Towers of the Savannah 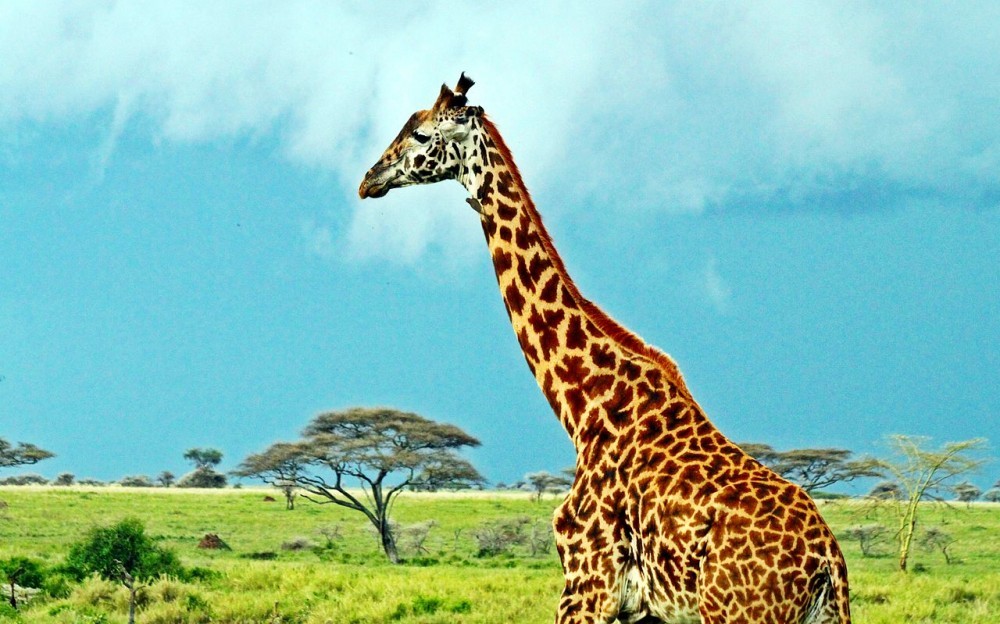 Giraffes are the world’s tallest animals. Watch out Lebron James! The giraffes know how to guard. Interestingly enough, if a giraffe wants to drink water, it has to awkwardly spread its legs and kneel down to get a drink of water. Fortunately though, they do not need to drink that often, only stopping for a sip every few days. Watching these animals stride across the savannah is like watching a pro NBA game; you cannot believe how tall these guys are.

4. An Elephant and Ostrich, Common on the Plains 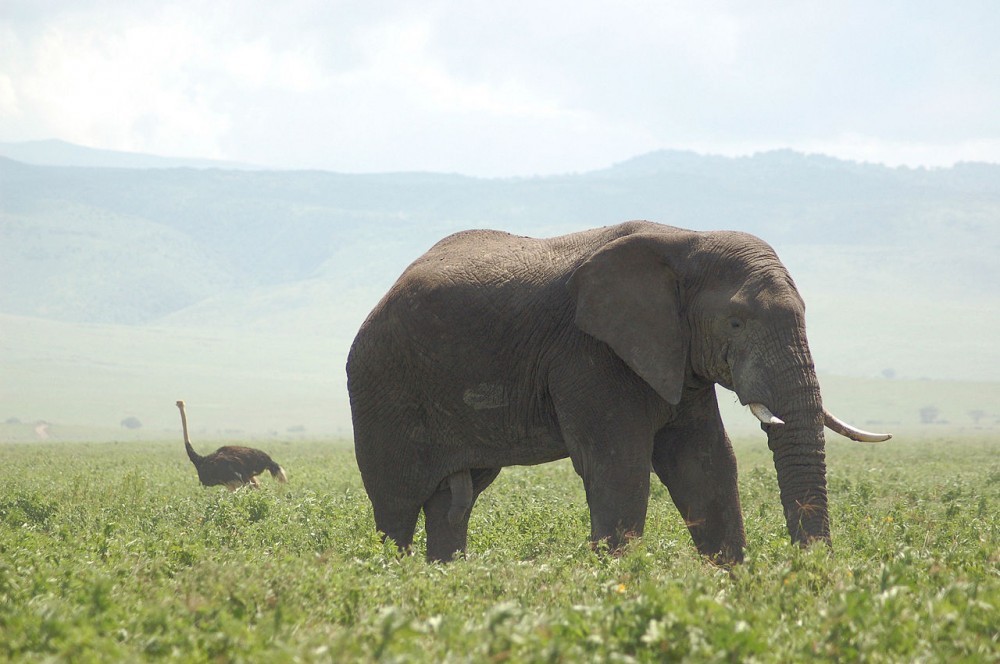 An elephant is the world’s largest land animal. No other compares in weight or size. They can weigh anywhere between 5,000 and 14,000 lbs (2268 to 6350 kg). Woah! That is big. The tusks you see are to dig up roots, scratch trees, forage, intimidate other elephants, and moving things out of the way. Unfortunately because of poaching, large tusks are quite rare in the wild.

In this photo, you also see an ostrich. By a wide margin, it is the world’s largest bird. In fact, people even so far as to eat ostrich eggs. Despite their seemingly non-threatening appearance, an ostrich has legs so powerful that they can be used in a formidable front kick, so be sure to keep your distance.

If you care about elephants, ostriches, giraffes, and other wildlife, then you might want to check out my article on the Top 10 Environmental Groups, Charities, and Organizations for Donations. The environment needs our help more than ever and, if we want to ensure that future generations will be able to see wildlife and nature, then we each need to do our part to stop the global pollution epidemic. Click on the link below to check out some groups you might want to give to. 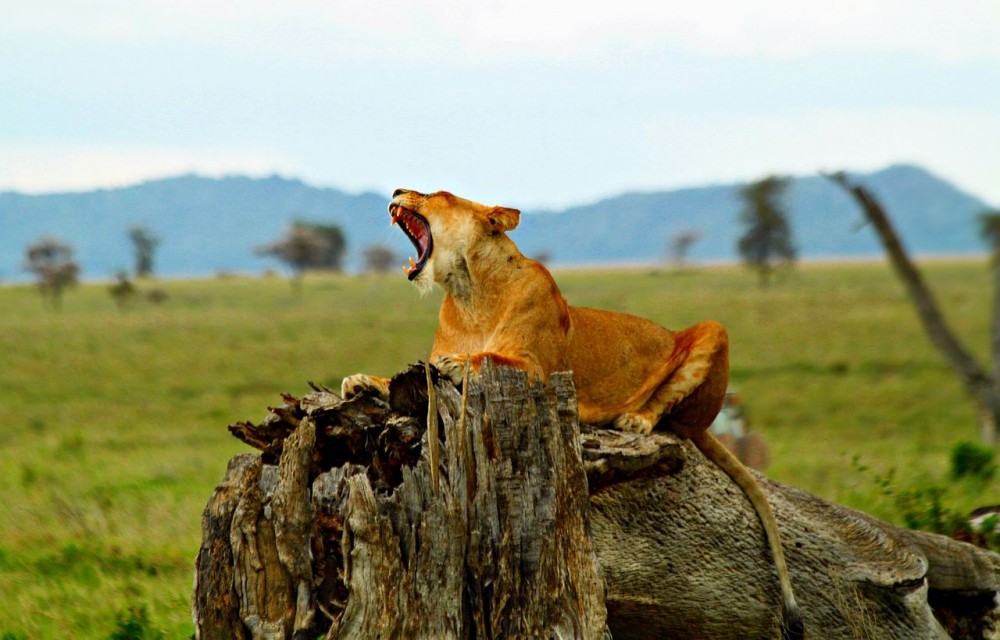 When I was camping in Kenya, I heard a lion’s roar and it woke me right up. I was wide awake. Nothing will send chills down your spine like a lion’s roar. They really do give me the shivers.

Second in cat size only after the tiger, the lion lives in groups of 30 called a pride. The male lions spend most of their time guarding their territory and cubs. Female lions, though, do most of the hunting. Despite their formidable reputation, they are the laziest of all cats, often sleeping 16 to 20 hours a day. Do not let that lull you though. They will go for an easy bite if they see it.

6. Ngorongoro Crater, a Must See Sight in the Serengeti

Formed when a large volcano exploded and collapsed on itself, Ngorongoro Crater is a wonder to behold. The name is a Masai word, coming from the sound name of a cowbell. In this photo, you are looking from the bottom of the crater to the Southern Rim. The crater feels like a distant magical land when the clouds roll in over the ridge.

7. Scavengers abound on These Plains 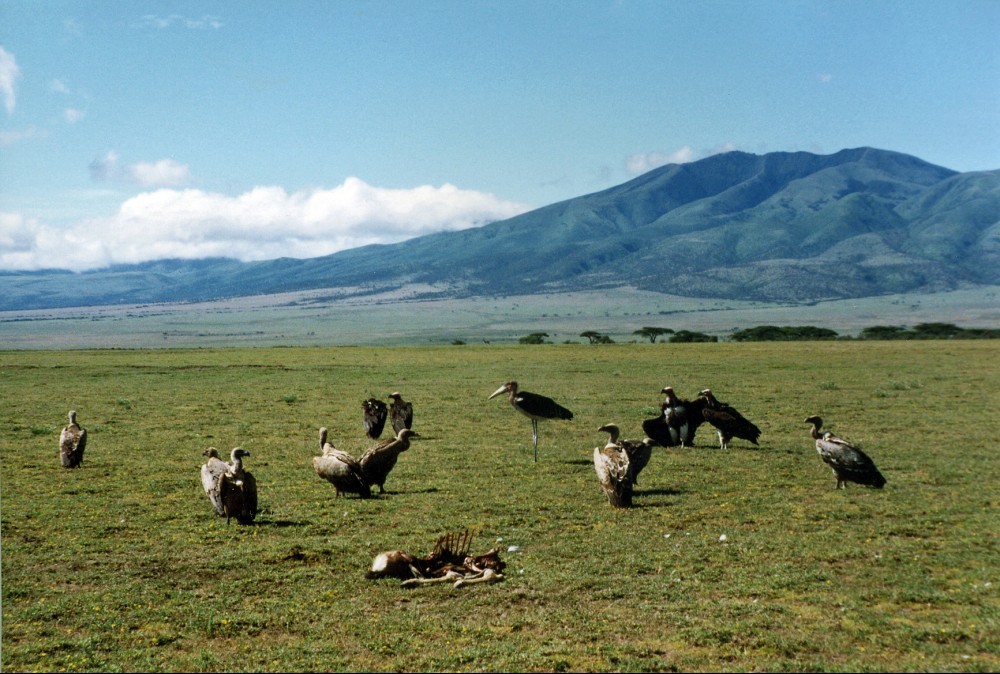 After a successful hunt on the Serengeti plains, vultures drop down from the skies like teenagers looking for a quick bite to eat. They feast on the corpses left behind by predators. You also can see a Marabou Stork in the center. Just like the vultures you see, it is a scavenger, feasting on the dead. When compared to other land birds, it has the largest wingspan of any land bird, even larger than that of the ostrich.

8. Zebras, Learn How to Pronounce it Correctly! 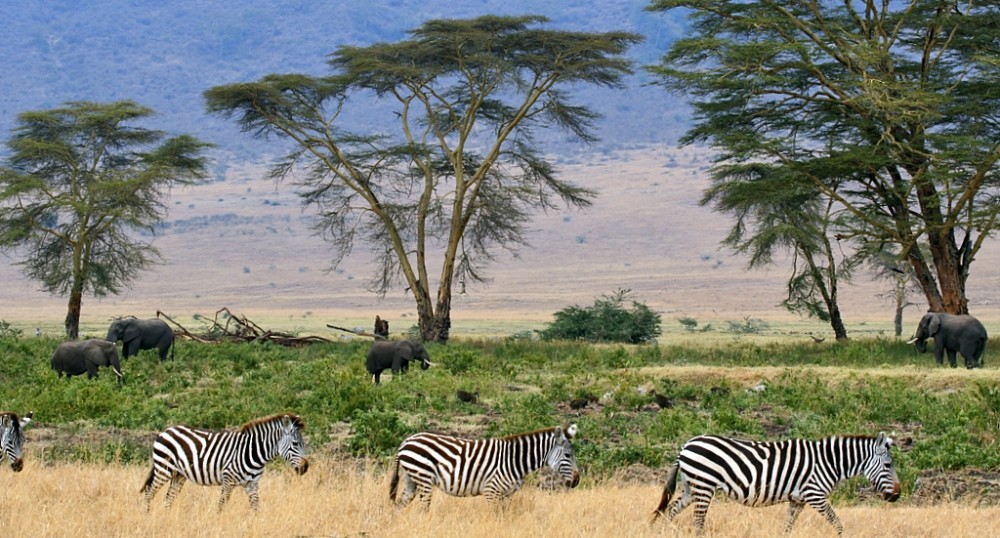 How do you pronounce Debra? You say Debra, not De-bra. It is the same with Zebra; it is not Ze-bra. Don’t worry though. I learned that I was pronouncing it wrong too. Interestingly enough, when chased by a predator, zebras run side to side to distort the vision of the predators that chase them. Although there is one real big question to consider, is a zebra white with black stripes or black with white stripes? The world may never know. 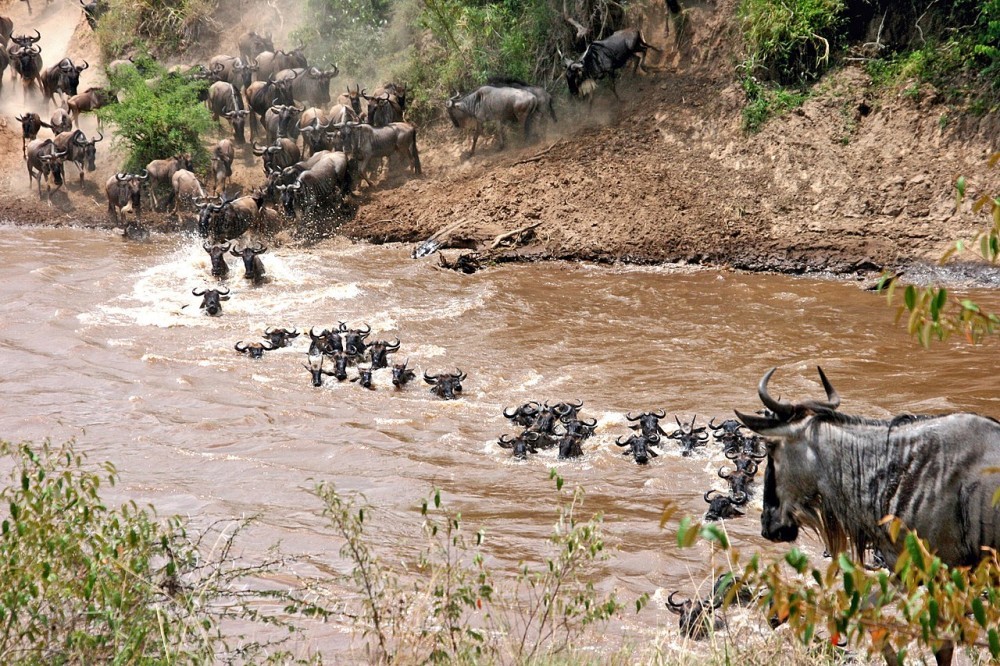 When crossing a river, wildebeest risk a lot. They are not designed for water, so they can run into danger if they encounter a ravenous crocodile. These scenes are iconic. Wildebeest tumble over each other, struggling to cross the river and bumping into each other. If you want to see wildlife action, then a river crossing is the best place to watch.

10. Lions on the Hunt, Fascinating to Watch 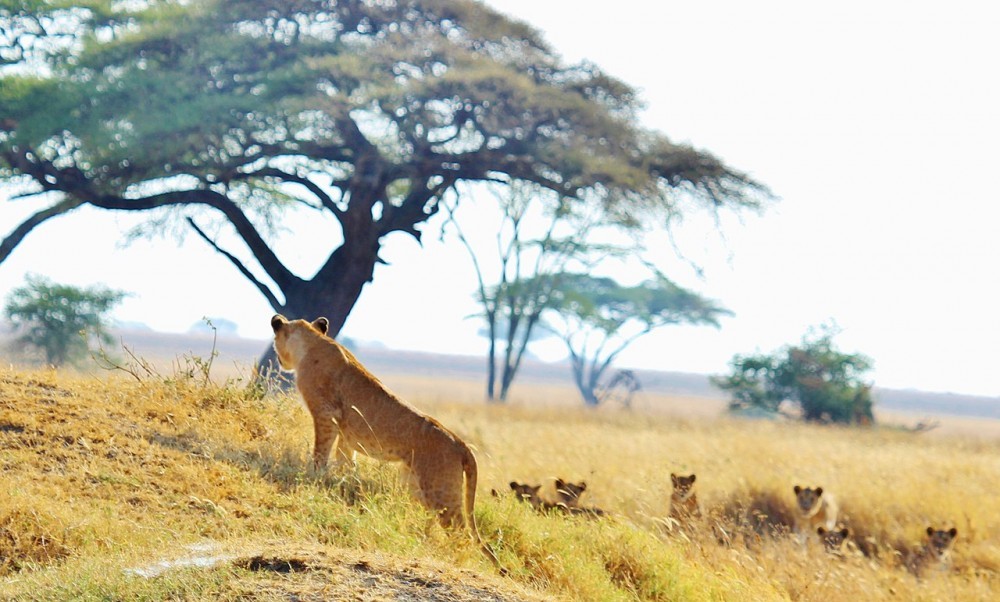 During a hunt, the smaller lions circle around their prey and push them towards the much stronger, heavier lions. They can take them down much better. After taking down their prey, they follow a hierarchy. The top males eat first, followed by the lionesses, and then the cubs. They adhere to this hierarchy very strictly.

11. The Rhino, a Rare Sight to See on a Camping Safari 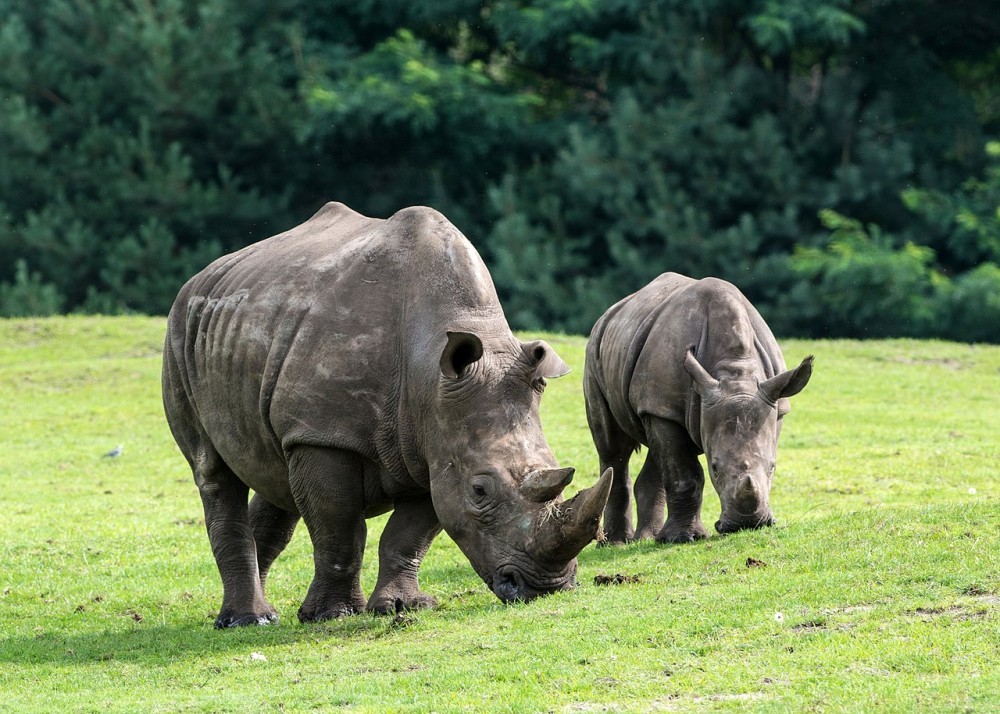 An ugly unicorn, an ancient dinosaur, the rhino is my favorite African animal. It was the first big 5 animal I saw on Safari in South Africa and it is a wonder to behold. Hunted for its supposed herbal health benefits from the horn, the rhino is endangered. There are two main types of rhino in Africa, the white and black. The difference between the two types lie in their appearance. These two are both white. If you see one of these on safari, then it is a very lucky day indeed because they are becoming more rare in the wild. 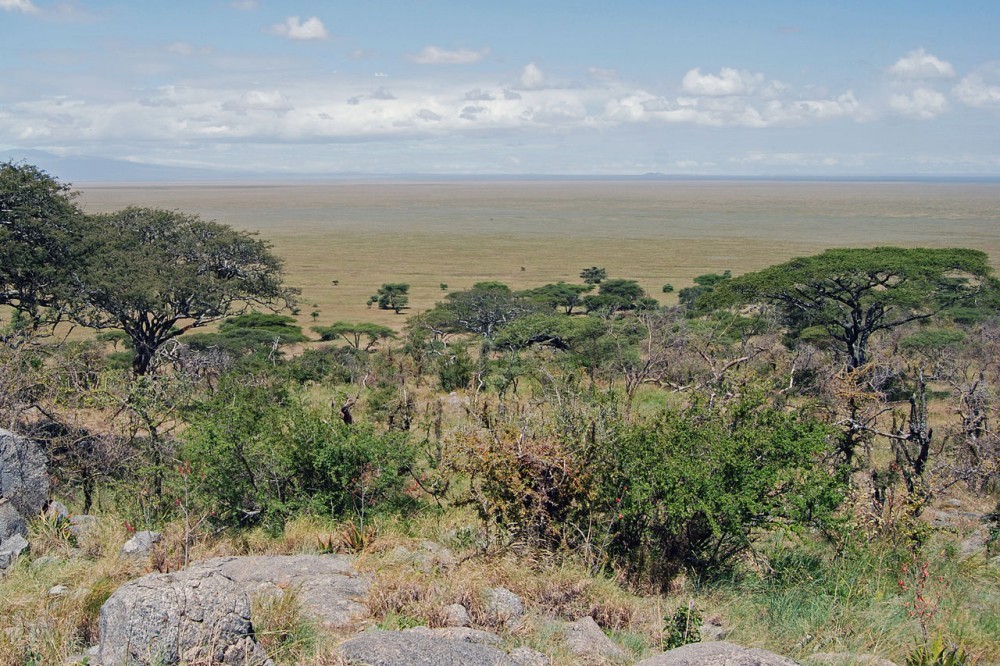 From the top of Naabi Hill, you get an idea for the extent of Serengeti National Park. Since it is the main entrance to the park, it is one of the first sites you will see. Taking one of the hiking trails to the top, you can spot a plethora of wildlife miles away from along the trail.

13. Retina Hippo Pool, Be Sure to Stay out of the Water 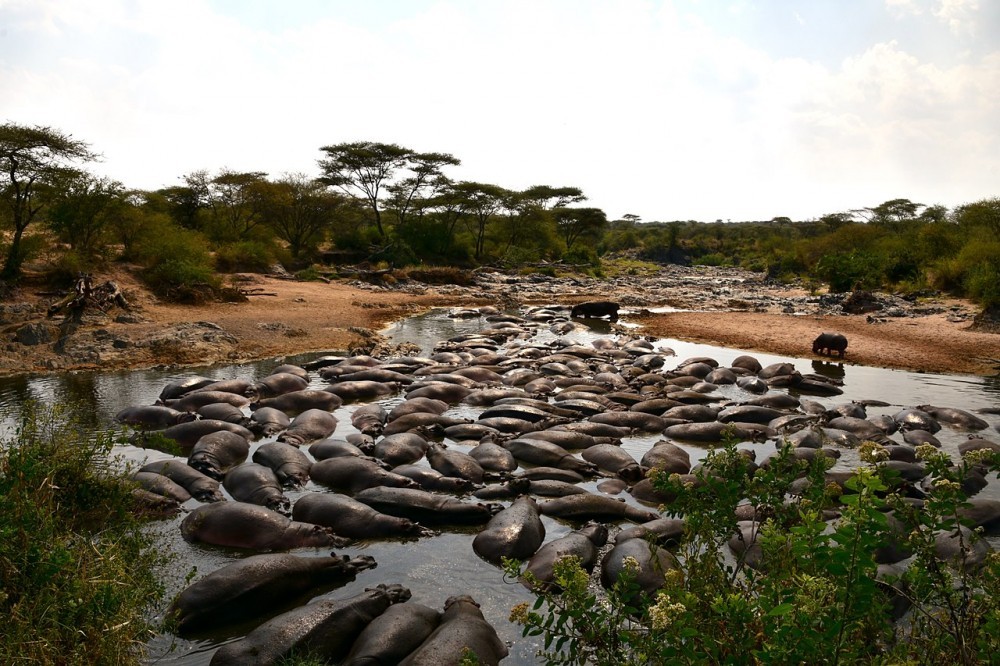 Lazy hippos bask in the cool waters of this pool, avoiding the hot African sun. Keep your distance. Hippos are the most underestimated animals of Africa, reaching very high speeds in the water and propelling themselves up and out. The sheer number of them is a wonder to behold. There are usually over 200 of them in the water. Remember to keep your nose pinched because it can be very smelly.

Are You Going to Embark on Adventure?

Serengeti National Park is the world’s oldest continuous ecosystems. You can taste the ancient air when you breathe on these majestic plains. The sun sets on the Serengeti today, but are you ready embark on adventure? One of the best places to find adventure in Africa is at REI. Are you ready to make memories that will last a lifetime? Your future self will pat you on the back.

==> I Want to Make Memories that Will Last a Lifetime <==

If you have any thoughts, questions, or think I missed anything, do not hesitate to comment below and please do share this article. Thank you so much and I hope you make it a great day! 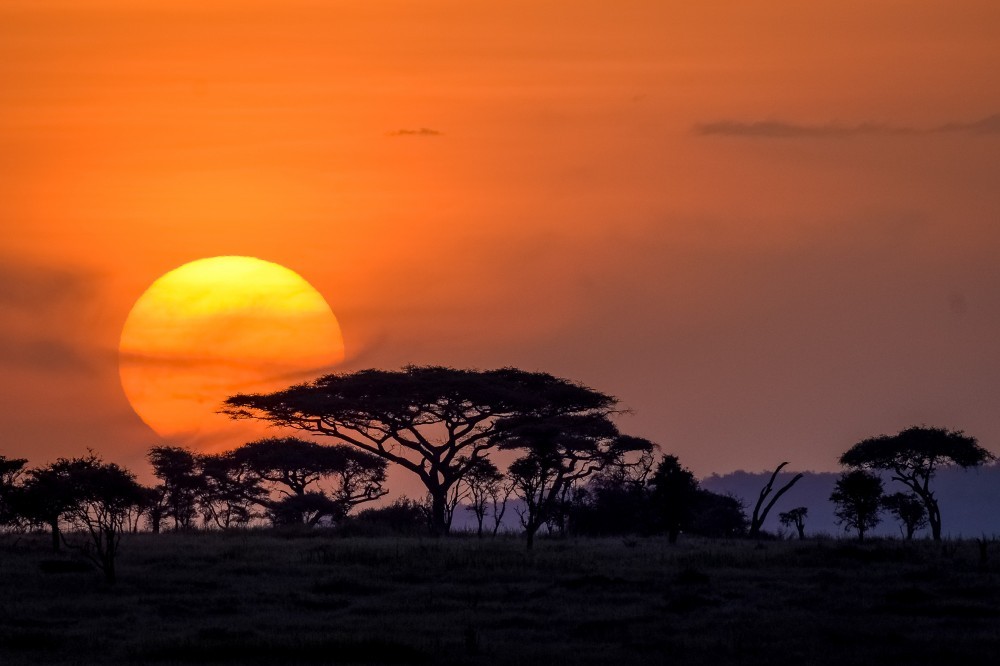